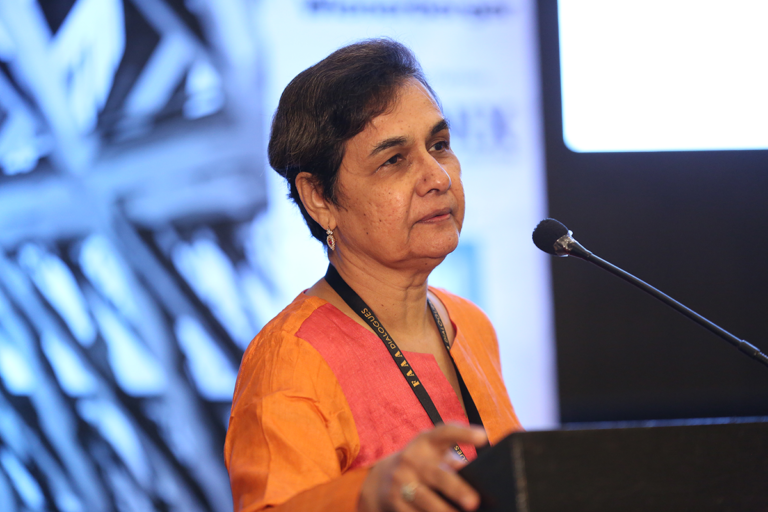 Welcome back to the blog. Academically architecture is quite romanticized, contrasting to that practicing of architecture as a profession is quite different. Now as a young graduate you think you are not contributing to the optimum level to the society, which you thought you’ll do once you are an architect. Now this is not a common phenomenon it won’t happen to everyone, if you’re someone who’s affected by issues in society you will understand what I am trying to say.

Change in society is difficult to bring about. As an architect the positive here is that we can address nearly each and every issue.    Now This week’s architect is someone who has not just created an impact but also brought about a change through her writings. Madhavi Desai, renowned architect and a passionate writer. In this attempt to run through the milestones of her life and her contribution through the medium of Architecture.

Architecture is a tool where we can affect positively or negatively people’s life. And from history we learn from our mistakes and develop our Architectural sense. If not Documented properly history won’t be adding value to the future.

If you want to destroy a civilization, don’t destroy their money or people, just simply burn their books.

Research and Documentation are the two main important aspects of History. And catalyst like Madhavi Desai play an important role in guiding us to our better future.

In the ‘often considered male dominated’ field of architecture, there are numerous women architects contributing commendably to the multifaceted profession that it is. Be it leading the frontiers of design, research, writing, teaching or allied fields, one always finds notable contributions of women. One such versatile architect and personality is Ar. Madhavi Desai. She is a principal architect at the joint studio Archicrafts for about 25 years since 1981, along with Ar. Miki Desai.

Ar. Madhavi Desai has an M. Arch. from the University of Texas at Austin, USA. She also received the senior research fellowship at the Aga Khan Program for Islamic Architecture in MIT, USA and Sarai, New Delhi and also from the Indian Council for Social Science Research, New Delhi.

Besides these she has received grants for various national and international assignments and has been an adjunct faculty at the Faculty of Architecture, CEPT University, Ahmedabad since 1986.

As a passionate writer, she has authored and co-authored some amazing pieces. Her book ‘Women Architects and Modernism in India’, is a fascinating account of era from 1940s, paralleling modernism and unconventional women architects and narratives of their work, life & experiences. This is a remarkable feat because of lack of any pre-existing archives on the matter.

Another very significant piece is the one that she has co-authored with Miki Desai and Jon Lang is, ‘Architecture and Independence: The Search for Identity, India -1880 to 1980’ (1997).This book traces the connection between architecture, independence, culture and aspirations of us as a nation.

It examines the effects of colonization and sheds light on ‘the iconography of the signs and symbols of a culture’ and ‘the role of architecture as a cultural phenomenon’.

Yet another interesting work is the book, ‘The Bungalow in Twentieth Century India: The Cultural Expression of Changing Ways of Life and Aspirations in the Domestic Architecture of Colonial and Post-Colonial Society’, a book that portrays various technological, political and social developments that shaped the bungalow as a building type and its evolution with respect to the same.

It offers a holistic analysis of the connection between architecture, culture and life and is a remarkably commentary on something as personal and intimate as a home. Further on these lines, she has authored the book titled ‘Traditional Bohra Dwellings of Gujarat: Architectural Response to Cultural Ethos’, which elaborates on the community centric dwelling style and eventual development of the same as a typology.

Ar. Madhavi Desai has also contributed to the Encyclopedia of Vernacular Architecture of the World, published by Oxford, UK in 1997 and was the editor of Women Architect Forum’s Newsletter, Ahmedabad (Since 1993 to 2001).

As a professor, writer and speaker she has graced many conferences and has lectured at many universities in Europe and the USA. She has been an adjunct faculty at the Faculty of Architecture, CEPT University, Ahmedabad since 1986.

At CEPT, she has mentored students on various relevant and sensitive topics such as ‘Introduction to Society and Culture’ and ‘Gender and the City’ as well as ‘Gender and Space’.

Widening the realm of writing further, she has also published articles such as ‘Architectural Education in India: Women Students, Culture and Pedagogy’ and ‘Woman’s Eye, Woman’s Hand: Making Art and Architecture in Modern India’. Being a woman architect’s contribution itself, these articles highlight the contributions of many more so.

It is truly remarkable how intricately weaved and yet how bold and headstrong these works are. It has added on substantially to the pool of knowledge about the South Asian and particularly Indian architecture.

Not only for all the women working in (or wanting to work in) architecture, but Madhavi Desai is an inspiration for many working and aspiring architects.

If you are interested in reading books written by her, I have provided the links below. It takes a lot of effort for such a revolutionary initiative. So, don’t hesitate to tweet to Madhavi Desai and Thank her for the contribution to our society.

BOOK 3: THE BUNGALOW IN TWENTIETH CENTURY INDIA: THE CULTURAL EXPRESSION OF CHANGING WAYS OF LIFE AND ASPIRATION IN THE DOMESTIC ARCHITECTURE OF COLONIAL & POST COLONIAL SOCIETY.

Also, a big shout-out to Madhura Kulkarni, our team Member for helping me with this blog. Show her some love in the comment section below. You guys have been really supportive till now and without you guys we wouldn’t have been where we are now. And without your support we wouldn’t have been a family of 700 followers whom I feel as my extended family. Now we need to spread it to a family of 1000 members. Show some love and Keep Supporting.

We write blogs on Architecture and everything around it, so if you are interested get in touch through these mediums: