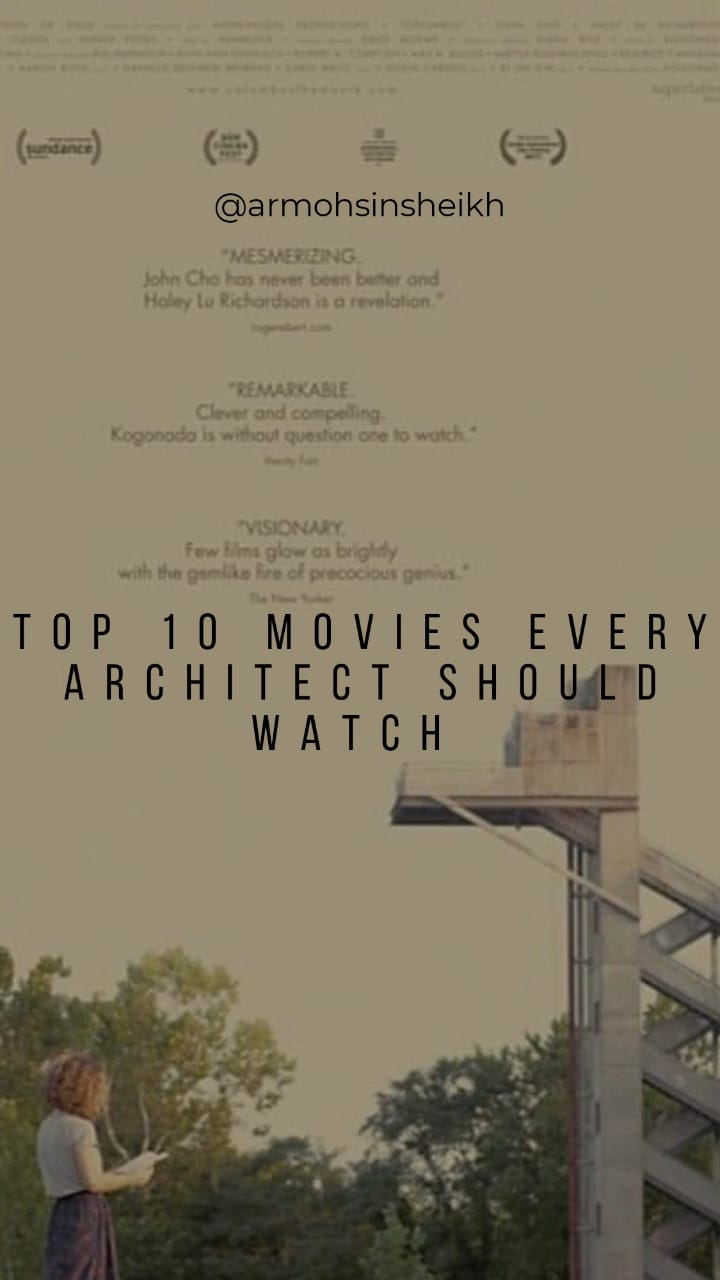 We are all bored in our houses. All challenges are done. All recipes have been made. Maybe you might have watched your favorite movie as well. I am guessing you might have missed these movies, if not, cool. Otherwise, if you are the one who had thought I’ll watch these movies in my free time. Guess what we have some now.

Architecture is a process of design and film-making is the process of experiences. Now when these two culminate a masterpiece can be set. And these stories can shape you as a better architect whilst the lockdown. Some of these movies are about an architect, some about cities, some are drama related to architecture. Here’s a list of the great movies for students and professionals in architecture.

This is a novel written by one of the favorite author AYN RAND. Individualistic and idealistic architect Howard Roark is expelled from college because his designs fail to fit with existing architectural thinking. He seems unemployable but finally lands a job with like-minded Henry Cameron, however, within a few years Cameron drinks himself to death, warning Roark that the same fate awaits unless he compromises his ideals. Roark is determined to retain his artistic integrity at all costs.

Warner Bros. approached Frank Lloyd Wright (who had been the inspiration for Ayn Rand’s character, Howard Roark), and asked him to submit some architectural designs to be used in the film. However, the studio balked when Wright requested his usual fee of $250,000 and decided instead to leave the designs to the film’s art director, Edward Carrere.

Roark (Gary Cooper’s) courtroom speech was the longest in film history up until that time.

When a couple sets out to build their dream house, they enlist the services of a visionary modernist architect, whose soaring ideas are matched only by his ego. The woman is swept away by this uncompromising creative artist whose personality provides a stark contrast to her practical husband’s. She is so taken she hardly notices the Architect is building HIS dream house.

The architect’s office is actually an architectural studio used by students from the University of Washington School of Architecture. In the background is the historic College Inn guesthouse originally built for the 1909 Alaska-Yukon Exposition. An architectural landmark in itself.

Forty-two-year-old Isaac Davis has a romanticized view of his hometown, New York City, most specifically Manhattan, as channeled through the lead character in the first book he is writing, despite his own Manhattan-based life being more of a tragicomedy. He has just quit his job as a hack writer for a bad television comedy, he, beyond the ten second rush of endorphins during the actual act of quitting, now regretting the decision, especially as he isn’t sure he can live off his book-writing career. He is paying two alimonies, his second ex-wife, Jill Davis, a lesbian, who is writing her own tell-all book of their acrimonious split. The one somewhat positive aspect of his life is that he is dating a young woman named Tracy, although she is only seventeen and still in high school. Largely because of their differences a big part of which is due to their ages, he does not see a long-term future with her. His life has the potential to be even more tragic comical when he meets journalist Mary.

The film features the music of George Gershwin including his famous piece, ‘Rhapsody in Blue’, which has been said to have inspired the movie. In a discussion with ‘Silvio Bizio’, Woody Allen said that the picture “evolved from the music. I was listening to a record album of overtures from famous George Gershwin shows, and I thought ‘This would be a beautiful thing to make a movie in black-and-white, you know, and make a romantic movie”.

Sometime in the future, the city of Metropolis is home to a Utopian society where its wealthy residents live a carefree life. One of those is Freder Fredersen. One day, he spots a beautiful woman with a group of children, she and the children quickly disappear. Trying to follow her, he is horrified to find an underground world of workers who apparently run the machinery that keeps the Utopian world above ground functioning. One of the few people above ground who knows about the world below is Freder’s father, John Fredersen, who is the founder and master of Metropolis. Freder learns that the woman is called Maria, who espouses the need to join the “hands” – the workers – to the “head” – those in power above – by a mediator who will act as the “heart”. Freder wants to help the plight of the workers in their struggle for a better life.

Much to Fritz Lang‘s dismay, Adolf Hitler and Joseph Goebbels were big fans of the film. Goebbels met with Lang and told him that he could be made an honorary Aryan despite his Jewish background. Goebbels told him “Mr. Lang, we decide who is Jewish and who is not.” Lang left for Paris that very night.

The multiple-exposed sequences were not created in a lab but right during the filming on the set. The film was rewound in the camera and then exposed again right away. This was done up to 30 times.

An American architect arrives in Italy, supervising an exhibition for a French architect, Boullée, who is famous for his oval structures. Through the course of 9 months, he becomes obsessed with his belly, suffers severe stomach pains, loses his wife, exhibition, his unborn child, and finally his own life.

Etienne-Louis Boullee (1728-1799) was a real architect. Many of his neoclassical designs that were built still exist, mostly in Paris, France. His project for the Cenotaph for Isaac Newton has been much studied by architects for its viability, not least by Albert Speer who modelled the New Berlin for Hitler. The cake presented to Kracklite at the initial banquet is a perfect replica of Boullee’s drawings for the Isaac Newton Cenotaph.

In the twenty-first century, a corporation develops androids to be used as slaves in colonies outside of the Earth, identified as “replicants”. In 2019, a former Police Officer is hired to hunt down a fugitive group of replicants living undercover in Los Angeles, California.

Director Ridley Scott and director of photography Jordan Cronenweth achieved the famous “shining eyes” effect by using a technique invented by Fritz Lang known as the “Schüfftan Process”: light is bounced into the actors’ and actresses’ eyes off of a piece of half mirrored glass mounted at a forty-five-degree angle to the camera.

Rarely has an architect caused as much sensation outside of the architecture community as Rem Koolhaas. His outstanding creations–such as the Dutch Embassy in Berlin, the Seattle Library and the Casa da Musica concert hall in Porto–are working examples of the Dutchman’s visionary theories about architecture and urban society. But Koolhaas’ work is as much about ideas as it is about constructing buildings; he is equally celebrated as a writer and social commentator. For Koolhaas, what is essential is not to create individual masterpieces, but to provoke and excite through the wide range of his activities.

Rem Koolhaas: A KIND OF ARCHITECT is an engaging portrait of a visionary man that takes us to the heart of his ideas. Directors Markus Heidingsfelder and Min Tesch have made a visually inventive, thought-provoking portrait of the architect, prompting Rem Koolhaas to state, “It’s the only film about me that I have liked.”

Half of the human population lives in urban areas. By 2050, this will increase to 80%. Life in a megacity is both enchanting and problematic. Today we face peak oil, climate change, loneliness, and severe health issues due to our way of life. But why? The Danish architect and professor Jan Gehl have studied human behavior in cities over four decades. He has documented how modern cities repel human interaction and argues that we can build cities in a way, which takes human needs for inclusion and intimacy into account. ‘The Human Scale’ meets thinkers, architects, and urban planners across the globe. It questions our assumptions about modernity, exploring what happens when we put people into the center of our planning.

The defense and the prosecution have rested and the jury is filing into the jury room to decide if a young man is guilty or innocent of murdering his father. What begins as an open-and-shut case of murder soon becomes a detective story that presents a succession of clues creating doubt, and a mini-drama of each of the jurors’ prejudices and preconceptions about the trial, the accused, and each other. Based on the play, all of the action takes place on the stage of the jury room.

The ethnic background of the teenaged suspect was deliberately left unstated. For the purposes of the film, the important facts were that he was not of Northern European ancestry, and that prejudice (or lack of it) from some jurors would be a major part of the deliberation process.

All but three minutes of the film was shot inside the bare and confining, 16’x24′ “jury room”.

A Korean-born man finds himself stuck in Columbus, Indiana, where his architect father is in a coma. The man meets a young woman who wants to stay in Columbus with her mother, a recovering addict, instead of pursuing her own dreams.