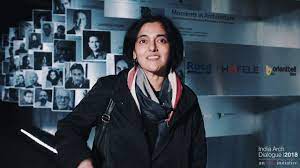 Welcome back to the blog. As architects we are surrounded by commercial architecture and standards, where we don’t really get to experiment the basics of space, form & light. And who could be better to learn it from, than the pioneers in the field of architecture themselves?

Shubhra Raje is an architect and educator who is the founder-principal of Shubhra Raje Built Environments. Its an inter-disciplinary design and research practice based in Denver (USA) and Ahmedabad (India).

As mentioned in the title, this blog will be divided into three parts where we will be focusing on Art, Architecture and Legacy. Raje has a diverse practice and it will be difficult to sum up the whole thing in just one blog. To initiate with these 3 are something that I feel you would be interested in.

“Teaching is an extension of what you practice” – Anant Raje

The reason for writing art before architecture is that inclination of Shubhra’s practice is not just restricted to architectural design, but also teaching. Now this is not traditional teaching here that I am talking about. I would like to mention about The ReFresh series of Workshop, conceived and conducted by Shubhra Raje and Denver based theatre-maker Mare Trevathan, that seek to reveal the pleasure and possibilities of built environments otherwise hidden due to habitual use and familiarity.

This workshop is unique in its own way and is one of its kind. The first part of everyday is spent doing exercises to defamiliarize ourselves with objects and architecture; to build an ensemble; to increase awareness of, and responsiveness to the people and surroundings; to decrease dependency on sight; and to identify and disrupt habits of both physicality and perception.

In the latter part of most days, groups of 3-5 work in to order compose short performances built specifically for various sites on campus. You can check out the detailed video. Link for video given below:

Raje has designed projects that range from community networks in Aurora CO, rehabilitating masonry structures in Egypt to the design of art spaces and multi-family housing, as well as social and educational institutes – thereby engaging in diverse issues, multiple constituencies and varying scales from interior design and architecture to community design and conservation.

Some of her recent projects involve culturally and environmentally contested sites in the peri-urban neighborhoods of Denver (USA), Abydos (Egypt) and Jharsuguda (Odisha).

Apart from the design of buildings, Raje has been actively involved in civic, educational and cultural affairs in both India and the United States, having served on the commissions for neighborhood groups, as well as coordinating design workshops that encourage young designers to become active in issues of social justice and cultural patrimony. She combines the grass roots community engagement with her deep interest in the legacies of modern architecture.

Jharsuguda lies in the mining heartland of India and owes much of its prosperity to the industries related to mining, minerals and power. The mining landscape thus became a catalyst for them. The shared principle: a tough, heft exterior – to protect against the harshness of the sun, dust, hot winds and the monsoons.

Strong geometric forms greet one as one approaches, with mere hints of openings providing clues to the activity within. And as one crosses the threshold, a different sensibility takes over. Not of resistance, but of extensions.

The composition begins to open up, creating spaces of shade and shadows, rooms without roofs. The continuity connects to an archetype, and provides a sense of endurance which we find meaningful in evoking a sense of place.

She is also the founding member of the Anant Raje Foundation, created as an archive as well as a platform to support cross-disciplinary initiatives in the field of art, architecture and the built environment.

Her current initiatives include the “ReFresh Workshop” series with Colorado based theatre-maker Mare Travethan which explores the built environment through the culture of play.

Link for the book is given below:

If you want to read more about design process and development, design and sketching and other interesting topics you can read the blog below.

We write blogs on Architecture and everything around it, so if you are interested, get in touch through these mediums: