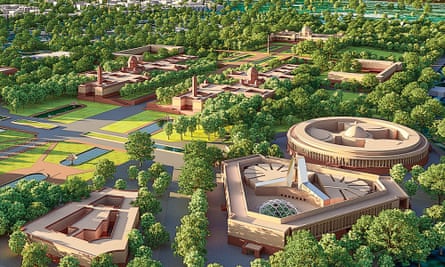 As we are stuck in the middle of the pandemic lockdown where even getting certain essentials is difficult. Ministry of Environment just gave a nod to the new parliament building.

An ambitious redevelopment project of the government that will strip away the Public Identity of an iconic National space. In October 2019 the BJP govt.  approved the central vista project of which the Estimated budget for the project is 20,000 crores.

20th March 2020: land use of 7 plots were changed in the Delhi Masterplan. Those spaces which were public/ semi-public are now changed to Govt office plots. 86.1-acre accessible public land is now converted to Govt office. A project of this size needs Public consultation. Round of studies are required in the public domain on topics like converting Public areas to Govt. office spaces, parliament as an Inadequate structure, consultation on demolishing heritage structures, and how the architect is being commissioned this project.

When asked to tell about the logic & studies (regarding the project) we were stone-walled, we just didn’t get any response – Madhav Raman

Transparency means that the due process really invests in getting as many questions before conclusions are arrived at. Anything that is done later is actually information sharing at its best – Amritha Ballal.

The ministry of Housing and Urban affairs notification clarified that the board of Inquiry and Hearing setup by DDA had considered all Objections & suggestions that had been raised. It added that the Central Government had carefully considered all aspects of the matter and had decided to modify the Masterplan.

Architects and civil society activists oppose to the project point out how land and environment permissions are been sought piece – meal for separate parcel of land. Rather than showing Central Vista project as a whole the New Parliament Building is shown as an individual stand-alone project.

The law very clearly says of this is a integrated project with 7/ 8 or even 4 components then you need to do Environment Impact Assessment for each of the project and do a Comprehensive Integrated Assessment for the entire project. Instead of doing that “THE” project has been broken up in 7-8 elements, what we only have before us is a Parliament Expansion. It is 9.5 acre, B2 category project. (over 50k sq. m but under 150k sq. m) doesn’t require EIA clearance and public hearing

The breaking up actually is a way around doing a full comprehensive assessment. Actually, discussing that the project is much bigger and its environment footprint is much bigger – Kanchi Kohli

“……Again, the correct way is to do a space audit to see whether things are being used efficiently before you enhance the space, sure technologically they all need a revamp, but none of the needs to mean fresh construction, cheaper and environment friendly to retro-fit” – Madhav Raman

While countries around the world are redeveloping to make cities more sustainable, eco-friendly those objecting to India’s Central Vista Project will end up creating more high security zones.

“its been a place for public expression of sorrow or happiness, that’s where we express ourselves and what better place to yourself as a people than in the forecourt of government. That’s the beautiful democratic reason of continuity in that space, what’s going to change is we going to be more reticent about expressing ourselves over there – Madhav Raman

The best way to leave a stamp on Delhi is by revamping the Central Vista. By this Modi Govt. will have a mark on the capital. The basic need for the development as mentioned by the government in the article were the reason given is to Renovate Outdated Infrastructure for Inadequate space. Nirman Bhavan, Krishi Bhavan, Vigyan Bhavan may be demolished under this project. North & South Blocks of Central Secretariat may be turned into Museums. No new Building will be higher than INDIA GATE.

In an article in January 2016, Dr. Bimal Patel wrote for daily newspaper about the need to break from the past and redesign the Indian Parliament. Soon after sometime Modi government announced the Plan for the Central Vista Project. In 2014 Modi commissioned KASHI – VISHWANATH CORRIDOR redevelopment project to Dr. Bimal Patel. In January 2019 government awarded PADMASHRI to Bimal Patel for his excellence of work in architecture. And in October 2019 HCP Designs was Awarded the consultation project of Central Vista Redevelopment Project.

Now as we go further deep in conversation of the discussing this project, I would hence like to you leave you pondering over the questions stated:

9 thoughts on “What is the reason behind the central vista project being a big problem?”