WELCOME BACK !!! to the 4th episode of THE TIME MACHINE PROJECT where we are now explaining the timeline of two major forts in Mumbai, namely SEWRI FORT & SION FORT.

As an architecture student and now as a practicing architect, I am always amazed by the story of these historical structures. They have so much in them to tell, so when we were given a design problem in our second year (back in 2012) I learned about these forts in Mumbai. That was the turning point where it all started. After researching these spaces I started visiting them one by one. From these events, I started learning about the evolution process of our city and this is my way of compiling these events.

BY TRAIN: Get off at sewri stations (east) which is on the harbor line. Its about 15min walking distance from the station.

Sewri Fort is built by the British in 1680 for defense. Now, it is a GRADE I heritage structure that offers a wonderful view of the flamingo migration at the sewri mudflats

Unlike some of the other forts in India that feature intricate designs, the architecture of sewri fort is simple & functional since it was primarily built for defense. Bordered by high stone walls & landlocked on 3 sides it has a stone doorway leading into a spacious courtyard, the inner entrance was strategically designed to be perpendicular to the main entrance so that if anyone tried attacking from the front they would fail.

The fort is constructed entirely of stone. It includes a pentagon-shaped room, 10 turret structures that were used to hold cannons & several curved staircases on the outer areas. The walls are thick and plain. We know BOMBAY (now Mumbai) was given to KING CHARLES II OF ENGLAND IN 1662, about which I have mentioned in detail in my previous blog if you haven’t read it, check out here: WHY MUMBAI IS KNOWN AS CITY ON SEVEN ISLANDS???

The EAST INDIA COMPANY had been working to improve trade opportunities in different states & were already warring with the Mughals. Bombay, with its vast harbor and rich trade prospects, was a coveted treasure & the Mughals hoped to conquer it. they were supported in this effort by the SIDDIS OF JANJIRA who were highly skilled in naval warfare. By 1670, the British were resulting in ruthless attacks by the siddis. One of the steps the British took to defend themselves against these attacks was to build a HILL FORT at SEWRI, on the island of Parel. it was intended to also act as a watchtower & help the soldiers lookout for potential invaders.

By 1680 it was ready, fifty sepoys were posted at the fort and a Subedar was appointed to manage it. The fort was armed with 8 – 10 cannons. Despite this, the fort was captured in 1689, which YADI SAKAT, THE SIDDI GENERAL FROM JANJIRA and his troops attacked Bombay following the capture of the sewri fort, the SIDDIS went to secure mazgaon fort and other parts of Bombay including Mahim. Stunned by these events, the then British Governor SIR JOHN CHILD entered into a deal with AURANGZEB to have YADI SAKAT in his tracks. An amount of Rs 1.5 lakhs exchanged hands. Betrayed by the deal THE SIDDIS GENERAL withdrew his troops & sewri fort was once again back under the BRITISH RULE.

In 1772, when the PORTUGUESE attacked Bombay the fort again played an important role to starve the invaders. In subsequent years, the fort was used to house prisoners. Soon, it was converted as a Bombay Port Trust godown/ warehouse and continued to be used as one until recently.

DISTRICT: MUMBAI
HOW TO REACH:

FORT was built by GERALD AUNGIER. The governor of Bombay to make a boundary between British held Parel and Portuguese held Salsette that lay to the north across the creek. The dates for the construction by the EAST INDIA COMPANY of the fort are given as 1669 – 1677. But Mumbai based Historian & Anthropologist SHEKHAR KRISHNAN refutes this. He says the fort “was built by Maratha contractors for the Portuguese as a MARINE BASTION overlooking the causeway to salsette”. After the cession to the crown, the fort was given to the EAST INDIA COMPANY. “The approaches and steps”, says Shekhar “was originally built by the Bombay Improvement Trust as part of their Estate Scheme no. 6 at the turn of this century.

In modern times, the fort was encroached upon and the Mumbai Heritage Conservation Committee was at loggerheads with the ASI about how this GRADE I HERITAGE structure should be preserved or beautified. The Last attempt at renovation in 2009 was abandoned due to a shortage of funds.

The BMC which built the park had grand plans of making it a theme park with a walkway connecting the garden to the fort, a mural depicting the seven islands of Mumbai as well as more seating and a canteen. Those plans were dashed by the ASI in a bid to protect what remains of the fort. 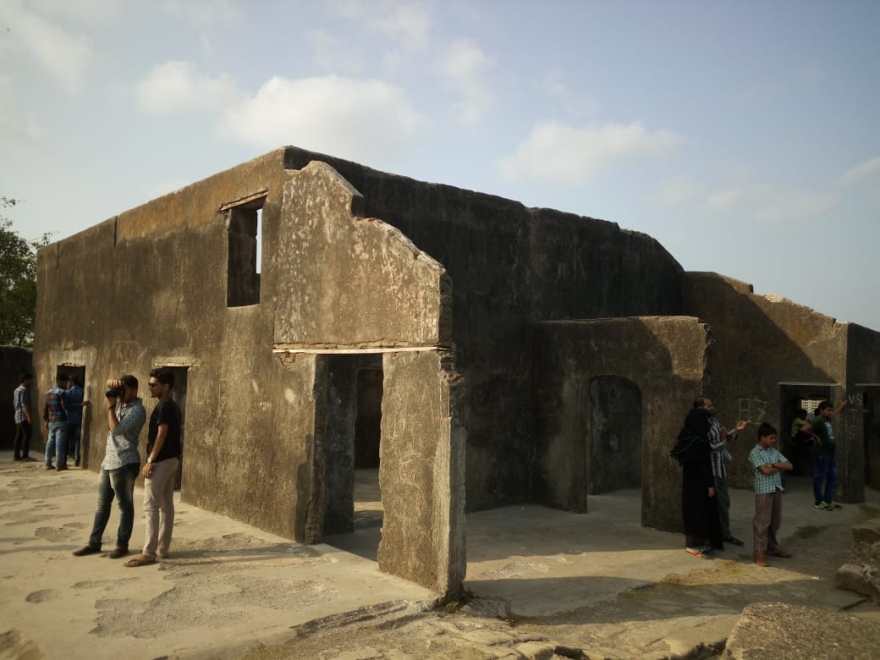 Apart from scenic views from these forts, people are using SION FORT as a place for social gathering. A park is built around SION FORT which is normally from morning to noon and in the evening from 4pm to 8pm.

If you are an explorer or history enthusiast or just a finder on peace in this chaotic city SION & SEWRI FORT are places for you. If you have been to these places share your experience in the comment section below.

This site uses Akismet to reduce spam. Learn how your comment data is processed.