WHAT WERE THE FOCAL POINTS?

HOW SETTLEMENT OF DWELLING HAPPENED IN THE CITY?

HOW WAS THE LIFE IN COLONIAL & POST COLONIAL ERA?

WHAT WAS SCENARIO OF CHAWLS IN MUMBAI?

I still remember in my architecture college days when we were getting ready for one of the trophies for NASA while doing the case study of chawls I learned how important these structures were to the urban fabric of the city. These were the spread outs from the focal points (Mills). Also, not to forget about the social aspect of these chawls. In India where you have so many festivals of which many are where the whole society is involved. The best part of these chawls was the courtyards which developed a strong cultural background amongst the tenants. Be it festivals, social events or just a Sunday morning cricket match it had a strong emotional value, and by urbanization we are losing these cultural pockets leaving us with just the nostalgia of such spaces.

So around the 1850s a lot of thing was happening in and around Bombay. In 1845 the seven islands coalesced into a single landmass by the Hornby Vellard Project. In 1853, we had our first Indian railway opened which stretched from Bombay to thane. In 1854, we had our first cotton mill in Bombay.in 1863, the British orchestrated the construction of a robust and affordable transportation system of local railways. In 1872, the addition of trams, trains and bus routes throughout the city allowed people to move into the suburbs post-independence. Due to unplanned settlements, overcrowded and unsanitary conditions, Plague broke out in 1896. In response to those problems the City Improvement Trust was established to open new localities for settlement and to erect dwellings for the artisan classes.

As Bombay prospered as an industrial and commercial center, many prestigious urban projects were undertaken in the colonial (European/ British) parts of the city in an attempt to mirror the ‘spatial reconfiguration of the 19th-century European cities. It appears that the large parks, monuments, bungalows and wide streets of south Bombay came to be precisely because the poor lived and continue to live n chawls and ‘slums’, area without any civic amenities. 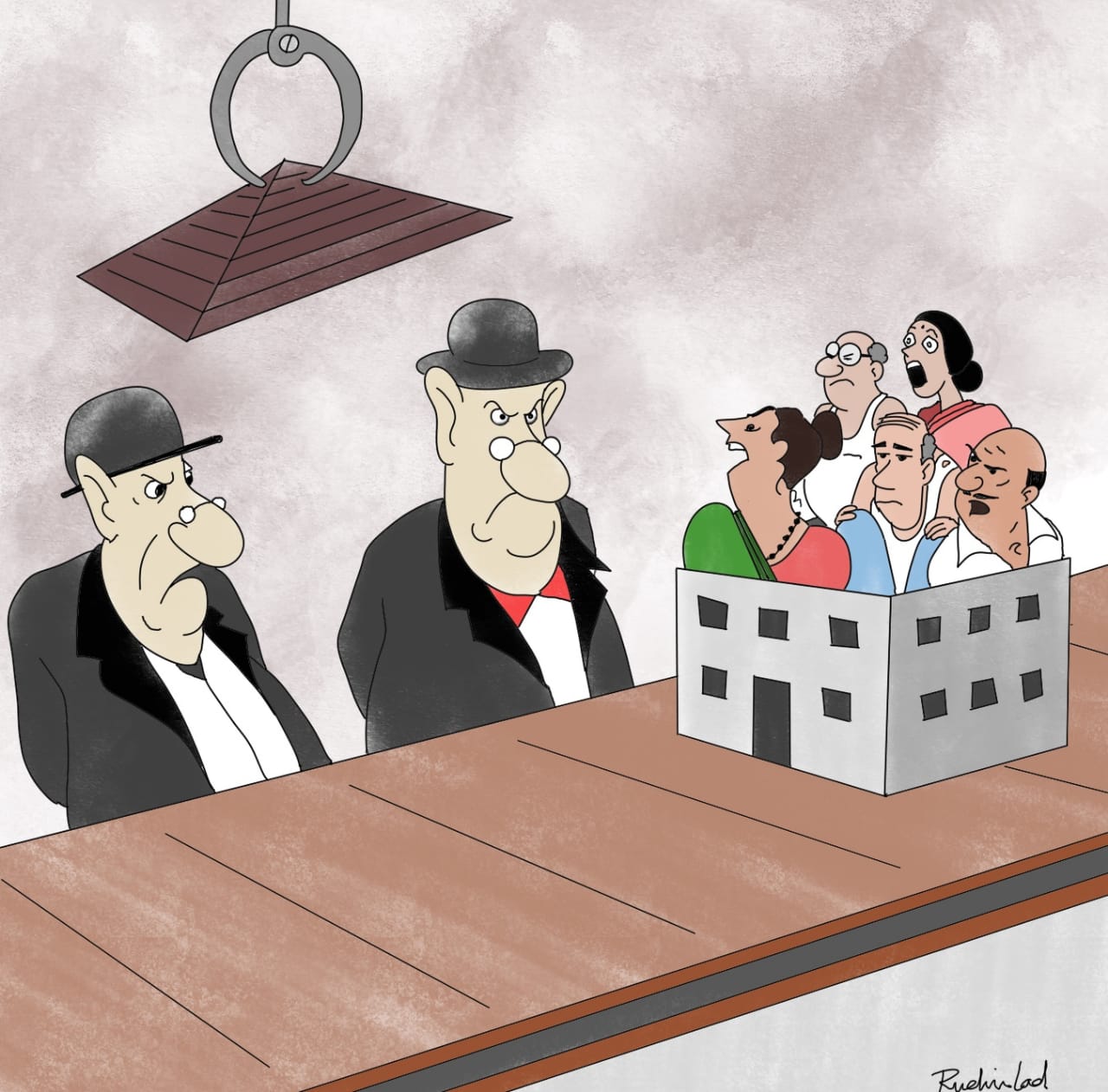 Sketch by Ruchir Lad on “Chawls in Mumbai”

In 1890 when the city boasted of 70 textile mills, it was estimated that around 100,000 people slept on roads or footpaths. Continued industrialization throughout the early 20th century caused exponential increases in population and contributed to the continued growth of chawls and slums beyond the wall.

According to Adarkar, Pendse and Finkelstein (2011), living conditions and the fate of working-class dwellings are closely related to urbanization in Mumbai. Industrial land during the early 1900s was inexpensive due to its proximity to the outskirts of the fort area. Both workers and employers needed to have workforce housing within an accessible distance from the industry. It is estimated that at one time, almost 75% of workers lived within a 15-minute walk to their workplace. Incidentally, many textile mills arranged for some social commodities such as bathing areas and barbershops with their premises.

The chawls were originally permanent housing for male workers and were either mill-owned, constructed by Bombay (Mumbai) Development Department, or privately owned as an investment property. The Chawl was meant for both blue- and white-collar workers, though they lived in different buildings. Each Chawl formed an unofficial “neighborhood” in and of itself, where occupants were typically people pf the same origins, dialects, occupations, or classes. This organization has remained the same over the years. As the population gradually increased, timber and brick chawls soon became overcrowded and slum settlements began to develop into temporary clustered units. 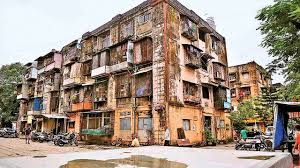 Dwivedi and Mehrotra (1995) describe how these overcrowded conditions made renting space more difficult. This difficulty led Chawl owners to seek creative ways to accommodate new members or migrants, such as partitioning single rooms, installing folding wooden planks to serve as bunk beds and constructing mezzanine lofts for storage and sleeping.

Further, the British introduction of reinforced cement concrete (RCC) as a construction material dramatically increased the rate at which developers could build chawls, demonstrating how Indian and British contractors actively promoted these living conditions. Though cement was imported initially, the readily available sand for concrete mixture paired with cheap labor in Mumbai made RCC an ideal solution to the local housing shortage.

According to Adarkar, Pendse and Finkelstein (2011) during colonial rule, the mill-owned tenement housing was quite unpopular, though considered to be the most convenient accommodation at the time. Adarkar (2011) writes, “Absence from work could not be easy if you stayed in one of these chawls. The owners could (and did) threaten to cut off electricity and water supply to the chawls if the workers were on strike, particularly what was termed ‘illegal strikes’. 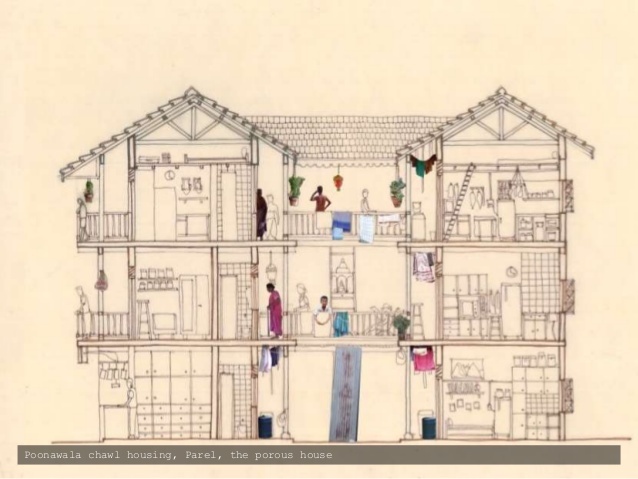 The overcrowded scenario of the chawl, with its bare minimum civic amenities, would become a reference for the layouts of slum dwellings. Similar to chawls, slums during colonial rule were also an outcome of severe housing shortages throughout the city. Lack of housing led new laborers to construct dwellings near their places of work, forming a network of huts and sheds without any civic amenities. These slums neighborhoods were symbolic of the surplus of cheap labor: laborer’s housing needs were neither supported by their employers nor the state; thus residents, viewed as dispensable, were under constant pressure of eviction.

Indeed, during the 1890s with the addition of 70 textile mills in the city, it was estimated that around one million people slept on roads or footpaths. In the 1940s with the end of World War II and amid India’s independence and partition – Mumbai experienced yet another influx of migrants and refugees who would find themselves living in slums and pavement dwellings. The census of 1911 shows that 69% of the population lived in one-room dwellings; by the 1930s an average of around four people lived in each tenement, with over two million tenements throughout the city. Within this context slums during the colonial era were intended to be only temporary squatter settlements.

Unlike the worker-occupied chawls of the 1900s, post-colonial chawls are occupied by families. While workers had little incentive to convert these dwellings into homes, families make continuous efforts to transform their units into a habitable living space. After moving into the chawls families gradually invest in improvements that display qualities of performance and stability. Common spaces such as corridors staircases, courtyards and roofs change with the needs of the occupants.

This was a fun collaboration with Ruchir Lad. Thank you for the sketches. You can check his Instagram for more such sketches. Instagram – archi_theatre

For more such cool stuff follow me on social media

UNTIL THEN, STAY TUNED & STAY SAFE

Kaiwan Mehta, “The terrain of home and within Urban Neighbourhoods (A case of the Bombay Chawls),” The Chawls of Mumbai: galleries of life, (Gurgaon: ImprintOne, 2011), 61.